Animals were an important part of the farm. Animals were raised for meat, eggs, and dairy for the family to use and sell. All members of the family would be involved with taking care of animals. Men would take care of the larger animals, making sure they had all the food, water, and care they need. Women would be in charge of processing the dairy and preserving vegetables and other produce from the garden that they also tended. Children would help in various ways with both parents. Children were responsible for taking care of the smaller animals such as chickens and miniature horses. They would also help with the baby animals that were raised on the farm.

Take a trip around the farmstead and see the animals that would have been raised in the 1920s.

The Farm has over 100 chickens in about 15 different breeds. Chickens would have been raised on farms in the 1920s for meat and eggs. Here at The Farm, we just use our chickens for eggs. Our chickens lay several colors of eggs including the classic white and brown but also some colors you might not expect. The Ameraucana, which is not a heritage breed, lay eggs of unique colors from olive green to robin’s egg blue.

The Farm assists in conservation efforts by choosing breeds off the Livestock Conservancy List to have on The Farm. This list includes breeds that are critically endangered, threatened, on watch, recovering and a study. For more information about the Livestock Conservancy, click here. The Farm includes breeds from most of these categories. The Crevecoeur is on the critically endangered list. This means that there are fewer than 500 breeding birds in the United States and an estimated population of less than 1,000 globally. By having these breeds, we can promote education and conservation efforts to save these endangered breeds.

Click here to learn more about the breeds The Farm has to offer! 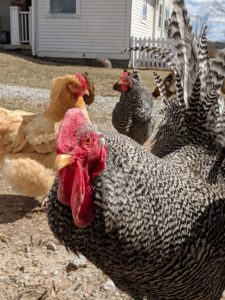 The Farm has 3 resident turkeys, Brenda, Helen, and Georgia. These turkeys are Narragansett breed which is also a heritage breed that is on the watch list according to the Livestock Conservancy. Similar to chickens, turkeys would have been raised for meat and eggs on the farm in the 1920s.  The Farm just uses the turkeys for eggs. Turkeys lay eggs from spring to early fall and they are much larger than chicken eggs. They typically are white with brown calcium spots on the shell. 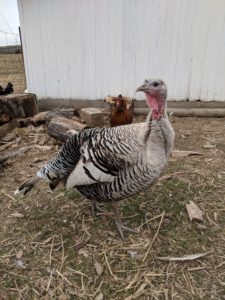 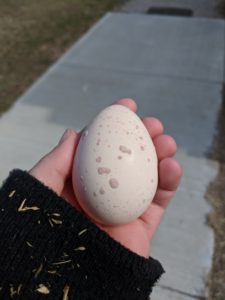 Thelma and Louise are our two sheep we have on The Farm. They are an Oxford and Suffolk cross breed. Sheep could have been used for meat in the 1920s but more importantly, they would have been used for their wool. Farmers would shear the wool and then clean it to spin into yarn. This yarn would be used to make blankets and clothing to be used by the family. Once a year, usually in late April, our sheep get hand sheared. Visitors can watch the shearing process and talk to the visiting spinners about how they turn the wool into yarn and see the final product. 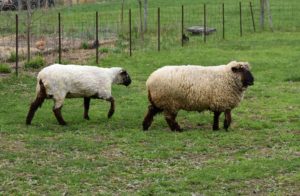 There are 11 ducks on The Farm. Just like chickens and turkeys, ducks would have been on farms in the 1920s for meat and eggs. The Farm has two different breeds of ducks: Buff and Pekin. Buff refers to the color of the duck which is a creamy brown and this breed is on the threatened list according to The Livestock Conservancy. The Pekins are the larger, white ducks. While most ducks are able to fly, breeds raised for meat weigh too much to do so. These ducks may walk up to a mile in search of water or food but ours are happy living here where their needs are met. 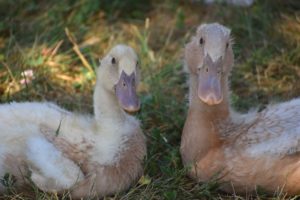 The Farm raises Berkshire pigs. Berkshires were common on farms in this area in the 1920s. Berkshires are a heritage breed as are most of our animals. Pigs would have been used for meat on the farm in the 1920s which is what we use them for today. Our pork is available for purchase. We raise pigs on The Fam during the warmer months, usually May through October, as they are kept on pasture with a small barn they can go into to keep cool. In order to keep cool, our pigs hang out in muddy wallows. Pigs also have very few sweat glands so the mud helps to cool them off. 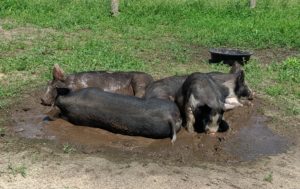 The cattle raised on our farm are Herefords. Herefords are a heritage breeds and have a long history in this area. Herefords have been raised in Tippecanoe County since the 1880s. Shadeland Farms was home to one of the largest Hereford farms in the United States at the time. Today, we get our Herefords from a nationally known Hereford breeder, Ted Hunt of Hunt Bros. Herefords whose farm is located in Battle Ground, Indiana. These cattle are raised for meat on our farm today, as they were raised in the 1920s.

The Farm is home to two Standardbred horses, Ryder and Daisy. Both of our horses came from Indiana Horse Rescue and are retired harness racing horses. Horses in the 1920s had several jobs on the farm. At that time, tractors and other farm equipment were available but many farmers still relied on horses to save money that could be spent on other things, such as a new car and traveling. Horses were used in plowing the fields and pulling carts around the farm. Besides helping with farming, horses were still being used in transportation since not everyone had access to a car. Standardbreds were typically used in harness racing which was common in the 1920s. Today, these horses are living their best life on The Farm, not having to do any work. 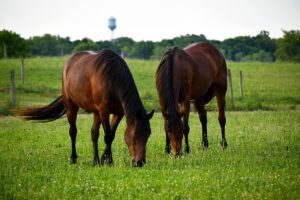 Like our Standardbred horses, our two miniature horses came from Indiana Horse Rescue. Hope is our older, buckskin colored mini horse. Mr. Bojangles is our brown mini and is considered The Farm’s mascot. Miniature horses were found on the farm in the 1920s. Children on the farmstead would take care of the minis to learn responsibilities and how to take care of livestock. They would also help with farming by pulling small carts used to haul small loads or taking the children to school. During the day, our minis can be found in the pasture behind the corn crib. 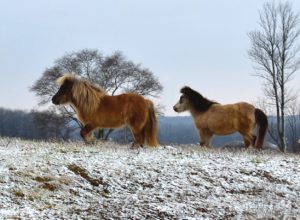 There is another animal that you might not see but is important at keeping the barn mice free. We have a couple resident cats that spend most of the day in the hay lofts. Many of the cats are shy and hide from people. One of our more friendly cats is named Glitter. He is a grey, long hair cat that watches over the barn at everyone who passes by. All of our cats are spayed or neutered. 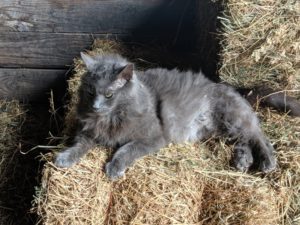