The I. Floyd Garrott Tenant House is an original Sears, Roebuck & Co. house in The Hampton style. It was built in 1921 by Charles and May Stubel as a rental house and would have cost $1,681. The house was moved from North 9th Street to The Farm in 2004.

The house includes a living room, dining room, kitchen, and 3 bedrooms, as well as a bathroom and a back entry room. The house has a total of 900 square feet not including the basement which would have been used for storage, laundry, and the furnace.

The majority of farms in the Wabash Valley in the 1920s were operated by tenant farmers. The more modest sized house would have been ideal for the tenant family. These families were hired by the farm landowner. They would be allowed to live on the farmland and be provided with pretty much everything they needed to live a decent life in exchange for their help on the farm. The tenant houses were comfortable and convenient houses. It was important for the landowner to make sure they had everything they needed. If the tenant was not happy about the way they were living, they would be less likely to work as well as they could and landowners wouldn’t want that.

Explore the I. Floyd Garrott Tenant House and see how the tenant family would have lived!

Because tenant houses were relatively small, many of their living areas were open so the areas seemed larger. In the Hampton floor plan, the living and dining rooms were connected to create an open space for entertainment. After a long day working on the farm, the farmer would come home to a nice meal made by his wife and the family would sit in the dining room and eat. After dinner they may decide to listen to some music on the phonograph or read a book.

Kitchens were one of the most important rooms in the house. The tenant farmer’s wife would spend the majority of her day in the kitchen making meals for the family while her husband was working in the fields. The kitchen had most things kitchens today would have. There was a stove, sink, refrigerator, and cabinets. They even had some more modern conveniences such as a toaster! While many of the appliances they had in the 1920s are similar to today, they were much different in how they operated. They also had some unique appliances for specific uses such as the cream separator.

Click here to learn more about some of the kitchen appliances. 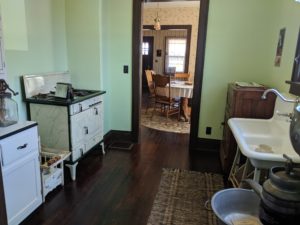 Bedrooms are much like today in that they have a place for sleeping and storage space for clothing. This bedroom is one of three in this house. This bedroom as well as one other included a closet space whereas the third one did not. Bedroom sets were common furniture in bedrooms. Dressers and wardrobes were commonly used to store clothing.

Also located in the room, hanging on the wall, is the marriage license of I. Floyd Garrott and his wife Edith Baker who funded the move of this house to its current location. In summer 2017, the house was restored through donations from I. Floyd Garrott’s granddaughter, Nola Gentry.

Click here to learn more about the bedroom and the restoration. 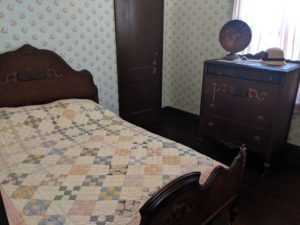 The Farm has 3 gardens where we raise heirloom varieties of produce. Heirloom varieties are older varieties of plants that have been selectively bred for farming. These varieties were commonly saved and passed down through generations. Today, The Farm raises several kinds of heirloom vegetables such as beans, lettuce, squash, and tomatoes. The Farm uses produce grown in our gardens in our Farm-to-Table dinners whenever possible. Produce is also available for purchase to the public when available. 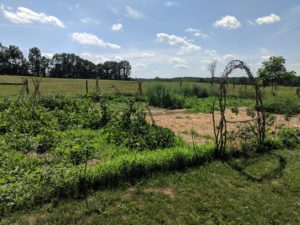