Sears, Roebuck & Company was founded in 1893, in Chicago. They had catalogs where people could mail order almost anything imaginable such as clothing, books, tools, farm equipment, and even houses! In 1924, the first retail store had opened up and by 1929, there were 300 retail stores across the country.

The Gibson Farmhouse is a replica of one of the many houses you could buy from Sears, Roebuck & Co. All of the pieces and materials you would need to build the house would come on railcars. A house this size probably needed about 3 full railcars! Oftentimes, neighbors would come together and host building parties to build the houses.

The Gibson Farmhouse, a replica of the Hillrose, was built in 2000 and was made possible through donations by Dale and Carol Sue Gibson. The Hillrose would have cost the buyer a total of $3,141. It included 9 rooms. The first floor included a library, living room, dining room, bedroom, kitchen, washroom, and a pantry. The first floor would have also had a shed connected to the back but because the replica needed to include an elevator for accessibility reasons, some alterations in the floorplan were made. The second floor included 4 bedrooms and a bathroom. The Hillrose would have had a basement that had concrete floors and 7-foot tall ceilings.

Explore the Gibson Farmhouse and see how farm families would have lived in the 1920s!

The entertainment space which includes the library or parlor room, living room, and dining room were laid out with an open concept. Between each of the rooms were doors that could be used to close off areas and create a more private room. There are French doors connecting the library and the living room and pocket doors connecting the living and dining room. Family time was important and since some had large families, a lot of space was needed.

Even though families didn’t have televisions or video games to keep them entertained they had several other things! They had radios, record players, stereoscope, and pianos. Children had toys and games they could play with just like today.

Click here to learn more about the items used for entertainment. 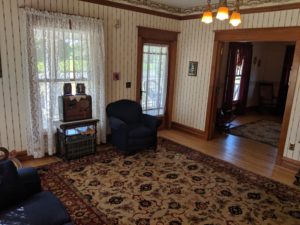 The bedroom was used much like a bedroom is used today. People would sleep here and keep their personal items in their room such as their clothes and vanities. The Sears catalogs made it possible for families to order any kind of clothing they might need such as dresses, underwear, swimsuits, hats, and school clothes. Many women still sewed their own clothing to save money with a sewing machine like the one in here.

Click here to learn more about the sewing machine. 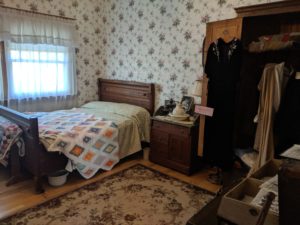 Kitchens were where the housewife spent much of her time. The kitchen was a place to cook all the meals. Stoves were used like today and ingredients were stored in a special cabinet. There was a sink as well. There might even have been a telephone so you could talk to your neighbors!

Click here to learn more about some of the items in the kitchen. 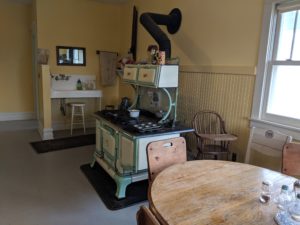 This pantry has a lot of space for storage. All of the kitchen gadgets you might need to create your meal could be found in this area. This would also have enough space to hold the ice box which held a block of ice to keep food cold similar to today’s refrigerator. The storage space could hold a variety of tools that might have been needed.

Click here to learn more about some of the gadgets you can find in the pantry. 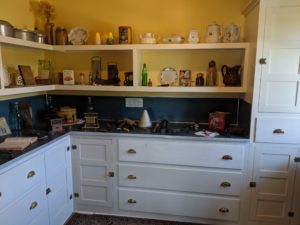 The washroom provided extra space so that the housewife would have room to do laundry or iron clothes. There were several methods of washing clothes. Many would use the washboard to get the clothes all clean. After rinsing the clothes, they would have been hung on the line to dry or on a drying rack like the one on the porch. Those families that had electricity might have even had an electric washer that did the wash for them! 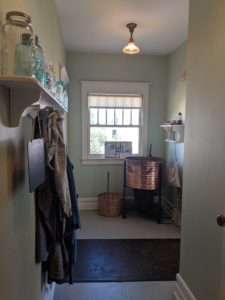