Farmsteads included several buildings that were specialized for whatever work the farm was centered around. The houses were where the families slept, ate, and lived. The coops and barns housed the animals. Others buildings provided storage for farm machinery. Additional ones such as the milkhouse or blacksmith shops had specific purposes. Windmills were also built on properties to aid in the work.

Farm families could often buy the buildings straight from the Sears, Roebuck and Co. catalogs. The men would build the desired buildings and the women would be able to decorate them as they wished. Picking out the buildings for the farmstead required an idea of what kind of work they wanted to do so they could order all the buildings they needed and could afford.

Take a tour of our farm to see what buildings were chosen for this farmstead!

The I. Floyd Garrott Tenant House is an original Sears, Roebuck & Co. house in The Hampton style. It was built in 1921, by Charles and May Stubel as a rental house and would have cost $1,681. The house was moved from North 9th Street to The Farm in 2004.

The house includes 6 rooms- a living room, dining room, kitchen and 3 bedrooms, as well as a bathroom and a back entry room. The house has a total of 900 square feet not including the basement which would have been used for storage, laundry, and the furnace.

You can learn more by taking the Tenant House tour!

Sears, Roebuck & Company was founded in 1893, in Chicago. They had catalogs where people could mail order almost anything imaginable such as clothing, books, tools, farm equipment, and even houses! In 1924, the first retail store had opened up and by 1929, there were 300 retail stores across the country.

The Gibson Farmhouse is a replica of one of the many houses you could buy from Sears, Roebuck & Co. All of the pieces and materials you would need to build the house would come on railcars. A house this size probably needed about 3 full railcars! Oftentimes, neighbors would come together and host building parties to build the houses.

The Gibson Farmhouse is a replica of the Hillrose and was built in 2000. The Hillrose would have cost the buyer a total of $3,141. It included 9 rooms and a bath. The first floor included a library, living room, dining room, bedroom, kitchen, washroom, and pantry. The first floor would have also had a shed connected to the back but because the replica needed to include an elevator for accessibility reasons, some alterations in the floorplan were made. The second floor included 4 bedrooms and a bathroom. The Hillrose would have had a basement that had concrete floors and 7 foot tall ceilings.

You can learn more by taking the Gibson Farmhouse tour!

The machine shed provides storage for farming equipment.  Wagons and trolleys are stored in the shed. The machine shed includes a closed in garage area that was originally used as a blacksmith shop. Today, it is just used as additional storage space and stores one of our tractors. 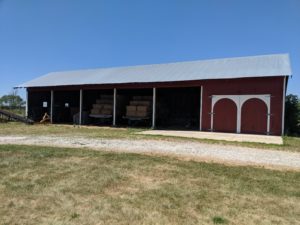 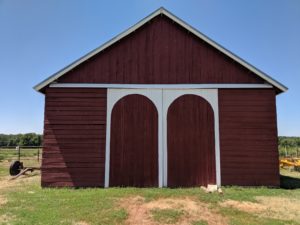 Barns were the primary buildings to house the resident farm animals. Sizes and shapes varied depending on the needs of the farmers. Barns not only housed the animals raised on the farms but also stored their food and bedding. This barn has two hay lofts where our hay (food) and straw (bedding) are stored to keep our animals happy and healthy throughout the seasons. Our barn is home to our cattle, Standardbred horses, miniature horses, and rabbits. If you look closely in the hay lofts, you may see some of our resident barn cats. They are great at keeping the mice in the barn away!

The milkhouse was important for farms with dairy cattle. The milkhouse was almost always located near the barn where the cattle live and along a road that would provide easy loading and transporting of the milk containers for sale. Having the milkhouse outside of the barn kept the milk away from the dirtiness inside the barn. This was a place to store and cool milk before it was transported to market. It also provided storage for unused milk cans and a place to wash and dry containers. In the early 20th century, there was a significant shift from making butter towards fluid milk sales. Women made the butter before and with the shift to selling milk, they took over those duties as well. Currently, our milkhouse is used an additional chicken coop. 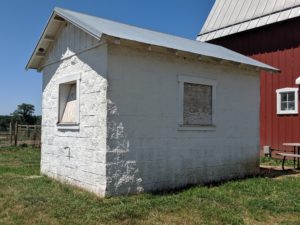 Windmills were a common sight on farms in the 1920s as well as today. The wind pushes the mill around and helps lift water from the aquifer to the spigot for use. This water is used for crop irrigation and for the livestock.

Blacksmith shop have been used for centuries to make and mend whatever tools and equipment that was needed for the farm. These tools might include shovels or other gardening tools. People often think that blacksmiths only make swords, knives, and horseshoes which is not the case.

The blacksmithing process is a long and hard process. Because of lack of electricity during this time, all machinery was cranked by hand. A blacksmith hand cranked a blower that pushes air up through the fire to get it hot enough to burn the steel which is about 3000 degrees Fahrenheit. Part of the reason the blacksmith shop was so dark is so the blacksmiths could see when the steel was heated (when it glows red).

Various tools, dies, and anvils were used to shape and repair the steel. Hand crank drills were also used to help with the process. During the process of heating and shaping the metal, borax was commonly used as a welding agent. A slack tub filled with water was used to temper or cool the iron. The final product was finished with linseed oil to give a black look to the steel.

Click here to learn more about the objects in the blacksmith shop.